Mallow Run now has 12 acres of grapes in three vineyard locations, including four acres just planted in 2016 at The Sycamore at Mallow Run. We grow American and French-hybrid varieties which are more tolerant of cold Indiana winters than more recognizable vinifera varieties, such as Merlot or Chardonnay. These hybrids are essentially crosses of native varieties that thrive in our climate with those vinifera varieties that are well known for high quality wines. The end result is hopefully a new variety with the best traits of each parent. Examples include Chardonel, a Chardonnay hybrid, and Traminette, a relative of Gewürztraminer (and also the ‘Signature Grape‘ of Indiana!). In addition to those two, we grow Catawba, Vignoles, Chambourcin, Chancellor, and Leon Millot, and have just added four new “extra cold hardy” varieties at The Sycamore – Steuben, Swenson White, LaCrosse, and Brianna. 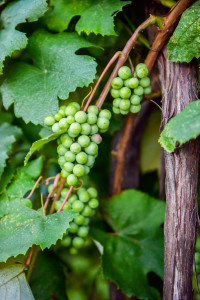 Each season starts with winter pruning, where we remove most of the previous year’s growth and attempt to determine what the next year’s growth and crop will be. The vines come out of their winter slumber around mid- to late April. This is an exciting time in the vineyard as buds swell and break open into new shoots. This is also a dangerous time for the tender young shoots as a chilling frost in April is always a threat.

Throughout the summer, each shoot will race to produce two to three clusters of grapes and many leaves which, through photosynthesis, will provide food for the plant and sugar for the grapes. Shoots often grow 10 feet long in a summer, and sometimes up to 20 or more feet! Harvest is the culmination of the year’s hard work and a time for celebration.

Harvest begins in August for some varieties and stretches until October for others. Warm and dry days are perfect for ripening the grapes. Three to six tons of only the ripest grapes are hand harvested from each acre and carefully processed into each year’s vintage.

Upon your next visit, enjoy a glass of wine, take a stroll through the vines, and feel the connection between the wine in your hand and soil beneath your feet.